(NOTE THIS IS A DEMO VERSION OF A PAST PAPER)

The goal of this study was to assess the diversity of animal species associated with Inks Lake, a small, shallow, slightly alkaline body of water that has been described by some sources as being devoid of aquatic life. Although the focus of this biodiversity survey was on vertebrates, mainly birds, water samples were also taken to obtain a snapshot of the diversity of aquatic invertebrates in the lake. Field data were collected from the beginning of May to December 2012 through weekly monitoring sessions. These sessions consisted of hour-long visits in which we identified and recorded the number of vertebrate species present at the lake. We also recorded the total abundance of ducks during each visit, and we noted any behaviours such as copulation, nesting, and raising young. A wide variety of bird species and aquatic invertebrate taxa was found at Inks Lake. Almost all of the bird species were observed feeding on the aquatic invertebrates and/or plants. The lake appears to be a stopover site for many migratory bird species, and several bird species were observed copulating and raising young. Inks Lake’s habitat quality and food resources are sufficient to support a diversity of species.

Inks Lake (Fig. 1) is a small, shallow, slightly alkaline body of water located south of Kamloops, BC in the interior grasslands. The lake is at an elevation of approximately 850 m above sea level and its shores are partially covered with salt deposits, as is typical of saline wetlands. The algae that grow at the edges of Inks Lake over the summer provide food for the aquatic invertebrates in the lake. Although the occurrence of fish and amphibians in alkaline lakes is usually very limited, these lakes typically have an abundance of aquatic invertebrates that are a food source for many resident and migrating birds (Boros, 2003). Inks Lake has been described by KGHM Ajax Mining as being “uninhabitable by fish and other aquatic life” (Ajax Copper-Gold Project Fact Booklet, 2011). It has also been stated that waterfowl do not breed there (Dueck, 2012). The purpose of this study was to assess the animal diversity of Inks Lake by monitoring the lake over time and taking detailed observations. This study primarily focused on the diversity and abundance of vertebrates and aquatic invertebrates, and the breeding activities of the bird species found on and around the lake. 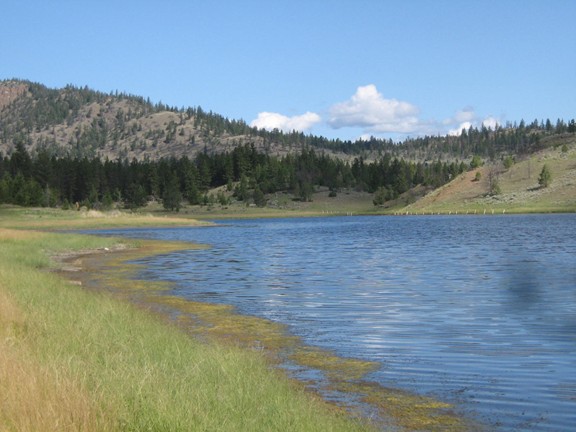 This study took place from May to December 2012. Field data were obtained during observation sessions that occurred approximately once a week. During each session, two observers spent 15 minutes at each of three observation stations positioned around the periphery of Inks Lake (Fig. 2). During this time these two observers identified and recorded the number of vertebrate species directly on, flying over, or on the shores of the lake, and noted any foraging and breeding behaviours. Species were identified visually using binoculars and spotting scopes or by sign, such as foot prints left on the shore. 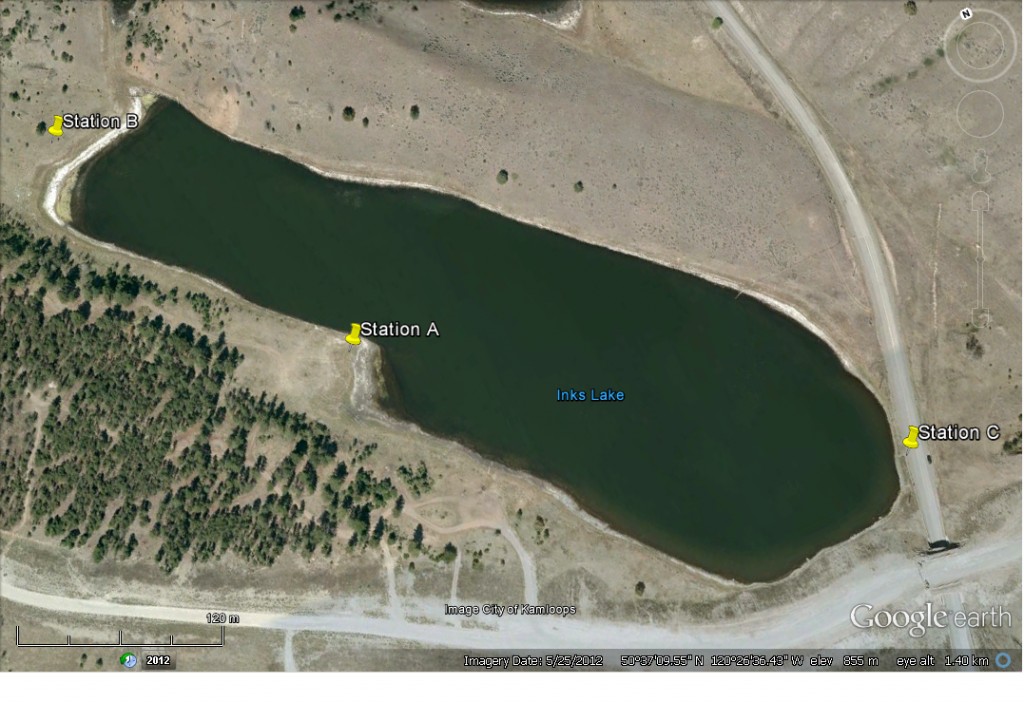 During each of the three 15-minute periods (one at each of the stations shown in Fig. 2) which comprised a weekly observation session, the two observers counted and recorded the total number of ducks on Inks Lake, and the maximum count for each session was used to plot the variation in duck abundance over the duration of the study. This was done in order to determine if there were a difference in duck abundance during migratory (spring and fall) and non-migratory (summer) periods. For this study the seasons were defined based on the maximum duck counts from the observation sessions. Spring was defined as those days on which the maximum duck count was higher than the average for the entire study; summer was defined as those days which had average or lower-than-average duck counts, and fall was defined as those days when the duck count again exceeded the average.

Although the focus of this biodiversity survey was on vertebrates, water samples were also taken at each of the observation stations at the beginning of August to obtain a snapshot of the diversity of aquatic invertebrates in Inks Lake. Benthic (lake bottom) and pelagic (open water) samples were taken using a petite ponar grab sampler and a D-frame sampling net (both available from Wildco Wildlife Supply Company). Aquatic invertebrates were identified in the lab using microscopes and an identification key. A ranking (with 3 levels: low, moderate, and high) of the density of each aquatic invertebrate taxon in the water samples was obtained by counting and comparing the number of individuals of each taxon. Three water samples (one at each of the three observation stations) were also taken on two occasions (a week apart) in October to measure the pH of the lake. The pH was measured in a lab using a Beckman Φ350 Temp-pH Meter (available from Fisher Scientific).

An index of bird species diversity was calculated for each observation session of the study using the Shannon- Wiener diversity index: H′ = −Σ(pilnpi) where pi is the proportion of the number of individuals of all species made up by one species (Pielou, 1975). The indices from each day out of the summer and fall seasons were averaged to give indices for the entire seasons. In the spring there was only one day with a higher-than-average duck count, and the index calculated for this day was used to represent the spring season. The purpose of averaging the Shannon-Wiener diversity indexes for entire seasons was to compare the diversity of bird species during the spring and fall periods of migration to the diversity of bird species during the non-migratory summer period

We identified 59 vertebrate species at Inks Lake, 58 of which were birds (scientific names of all bird species given in Appendix, Table 1). These included 8 species of shorebirds (order Charadriiformes), 18 species of waterfowl (family Anatidae), and 23 species of passerines (order Passeriformes) (Appendix, Table 1). Other aquatic bird species on the lake were the Common Loon and Horned Grebe. Dabbling and diving ducks actively foraged on and in the lake, and fishing birds such as the Common Loon and Hooded Merganser were seen diving. Several bird species were observed courting, copulating, and raising young at Inks Lake. Two broods of Mallard ducklings were observed in July; Barrow’s Goldeneye young were seen in June, Blue-winged Teal were observed raising young in August, and multiple families of Spotted Sandpiper and Killdeer were observed raising young in May and June. Cinnamon Teal, Lesser Scaup, Bufflehead, and Hooded Merganser were observed courting and copulating on the lake in May and June. Trumpeter Swans were seen flying near the lake in the fall, and swan tracks along with Great Blue Heron tracks were visible on the shores of the lake during some of the observation sessions in the later part of the study. 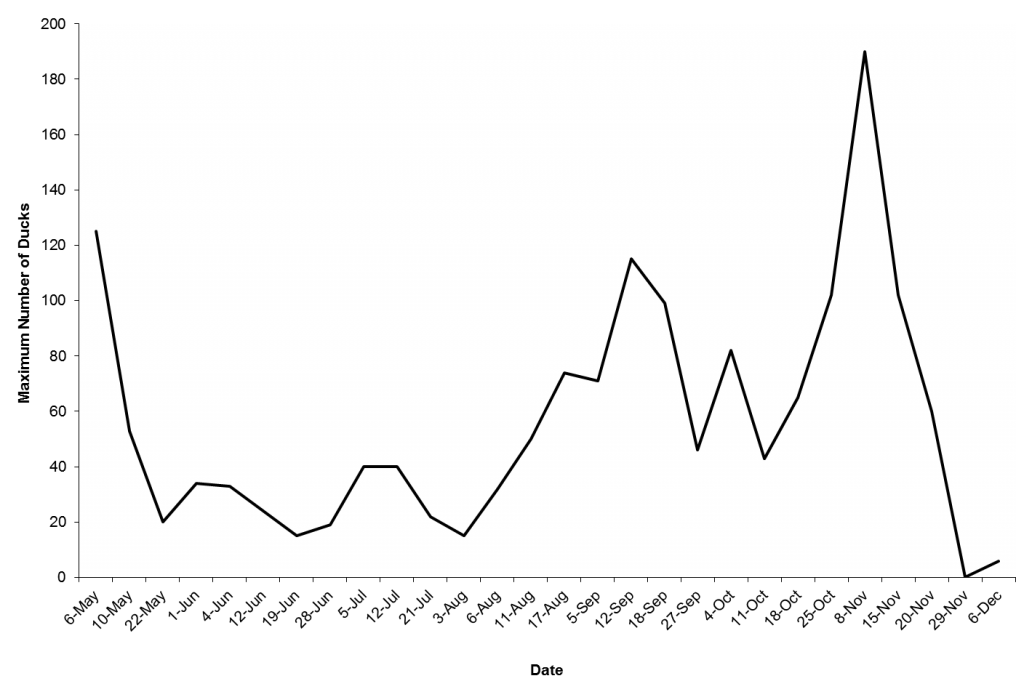 Figure 3: The abundance of ducks at Inks Lake during each observation session. 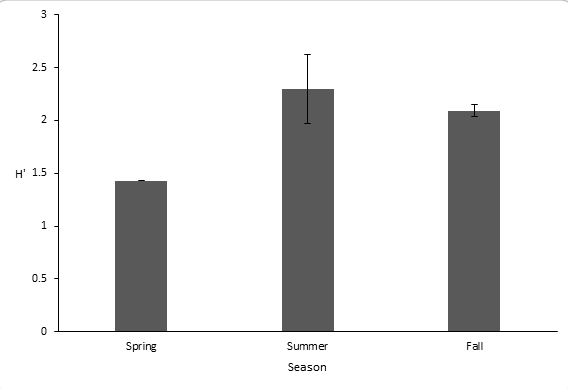 Figure 4: Average Shannon-Wiener diversity indexes (H’) for each of the spring, summer, and fall seasons.

A muskrat (Ondatra zibethicus) family was observed foraging and burrowing into the lake’s banks during several observation sessions. During water sampling in August an unidentified tadpole was seen swimming near station C (Fig. 2). Ten aquatic invertebrate taxa were identified from the water samples taken in August (Table 1). In the pelagic samples fly larvae (family Chironomidae), daphnia (genus Daphnia), amphipods (genus Hyalella), and damselfly larvae (families Coenagrionidae and Protoneuridae) were the most abundant. Water boatmen (family Corixidae) were also present in the pelagic samples, and aquatic snails were present in the benthic samples. However, these snails were too decomposed at the time the water samples were analyzed to key out. After averaging the pH of the water samples taken in October it was confirmed that Inks Lake is slightly alkaline, with an average pH of 8.7.

Table 1: Aquatic invertebrate taxa found in Inks Lake. Note: relative density is based on the numbers of individuals recorded in the samples and has three rankings: low, moderate, and high.

Contrary to previous descriptions of Inks Lake, which stated that it is uninhabitable by aquatic life (Ajax Copper- Gold Project Fact Booklet, 2011) and not a breeding grounds for waterfowl (Dueck, 2012), a wide variety of vertebrates and aquatic invertebrates was found at the lake. Several bird species and muskrats mate and raise young at Inks Lake. The young that were observed on (for ducks ) or around (shorebirds) the lake appeared to be hatched within the previous day or two of the observations, indicating that they were hatched from nests at Inks Lake as opposed to being brought in from elsewhere. Nearly all the vertebrate species observed at the lake actively forage in, on, or around it. Inks Lake also appears to serve as a stopover site for several species of migrating shorebirds and waterfowl.

The Shannon-Wiener diversity index was highest in the summer and not during migration periods, indicating a more even distribution and higher diversity of bird species during non-migratory periods. This may be because the arrival of large flocks of migrating birds at Inks Lake during the spring and summer skew the species distribution towards a small number of species. Also food resources provided by the lake are probably maximized during the summer as this is when there are abundant flies and algae on the lake’s edge.

The dabbling and diving ducks likely feed on the abundant aquatic invertebrates in Inks Lake, and the fly larvae and amphipods are likely a food source for the shorebirds (Arzel et al. 2006). The muskrats probably feed on aquatic vegetation and possibly on the snails (Eder, 2001). More rigorous water sampling is required to better quantify the abundances and diversity of aquatic invertebrates in Inks Lake in order to obtain a better picture of what the vertebrate species at the lake are feeding on. Also, an analysis of the aquatic vegetation in the lake should be performed in order to better assess the food source that the lake provides. Although we were unable to obtain permits to sample for the presence of fish, the behaviour of the fish-eating birds observed on the lake suggests the presence of fish. Further sampling is required to determine what it is that these fish-eating birds are eating in Inks Lake. In years of high water, fish have been known to travel from the adjacent Jacko Lake into Inks Lake (Steve Maricle, pers. comm.). Inks Lake is alkaline but, not the pH is well within the survival range of fish (e.g., Howell et al. 2006).

No species of concern were identified at Inks Lake during this study, with the exception of what was likely a western toad tadpole (Anaxyrus boreas) as indicated by this species’ distribution and ecology (Pearson and Healey, 2012) and personal observations of local Kamloops area naturalists. This species is listed as being under special concern by the Committee on the Status of Endangered Wildlife in Canada, and in B.C., it has blue-listed status (Pearson and Healey, 2012). For birds, breeding is costly, and the breeding success observed at Inks Lake indicates that the habitat provided by the lake is of sufficient quality to serve as the breeding grounds for several species, including migratory birds. If Inks Lake is altered or destroyed by the proposed Ajax Copper- Gold Project, a stopover site and breeding habitat and a food source for many species will be lost

Pearson, Mike and Healey, M.C. 2012. Species at Risk and Local Government: a Primer for BC. Stewardship Centre of British Columbia, Courtenay BC.

And So It Was Written